Fritz Lang’s 1924 film, Siegfried, the first half of his ambitious Die Nibelungen, used all kinds of romantic mechanisms to evoke perfection in its tragedy.  Interestingly, this provocative use of sumptuous imagery and thematic melancholy was in turn used to create an expressionistic, self-aware effect in its catharsis. 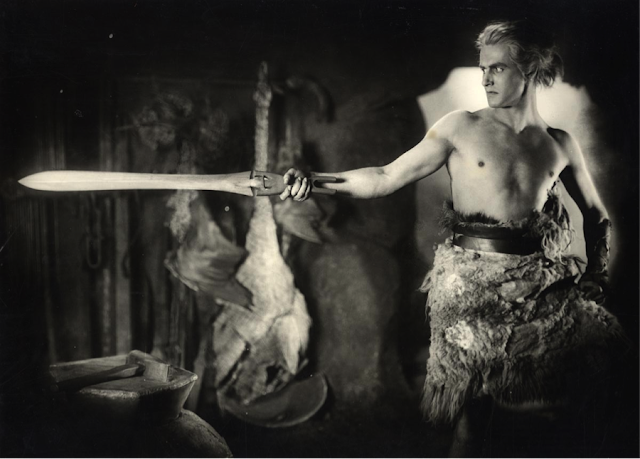 Siegfried had a number of factors synergizing to drive its romantic elements toward a fever pitch.  It was produced (by either Decla Bioskop AG or UFA, (?)) at a time when spectacle trumped financial obstacles in German cinema.  Despite the hyperinflation characteristic of the Weimar era, Lang was on a long leash for artistic license and expense.  The film is also colored with romanticism from the political enthusiasms of screenwriter Thea von Harbou, whom most accounts agree was party to the ardent nationalism of the era. Lang’s own obsession with the anatomy of myth (he careful crafted the elaborate, often idealized myths surrounding his own life story) creates a generous background for a polysemous, modern, deconstructionist story.

Die Nibelungen was based directly on the epic poem  Nibelungenlied, which dates back to around 1200 A.D. (Though Wagner’s Der Ring Des Nibelungen (1876) was also based on this text, it appears that Lang and von Harbou both adamantly maintained that the films were minimally influenced by it.)  Interestingly, just as Shelley claimed that the “Epic Poets’ creations bore a defined and intelligible relation to the knowledge, sentiment, religion, and politics of their age,” The films of Die Nibelungen are also marked with the signs of the intense moment in history in which they were forged.

Remarkably, many of the arts and sciences appear to have thrived in this kiln.  Efforts to raise the spirits of the German public became an imperative, and films of an epic, heroic nature were far more popular with the public than the dark and formalistic forays of German Expressionism.  With that in mind, Lang appears to have created a film that would appeal to and indulge the public demand for heroic mythos, but also to have severe and unmistakable modern elements, both in style and in narrative form.

The hero he brings to the table is the unmistakably Aryan Siegfried.  On the one hand he seems to represent Shelley’s ideal of poetry, that it show the best and most beautiful moments of the best and most beautiful people.  His character is distinctly made out, by contrast to every other character on screen, to be the best and most beautiful.  There is very little contrast in his character, in his moods or mannerisms, or even in the visuals of his personae.  He is all light all the time, and not until the hunt that spells his demise does he ever wear a costume with significant contrast in dark to light.  (And even then he shows far less contrast than any other character.)  Stylistically and thematically there is no darkness to his character.  Still, he could be described in the same terms as Shelley’s own poetry, “Dreamy, arrogant, self absorbed and irresponsible.”

As Lang devoted his film “to the German people,” he created a hero that, while embodying classical ideals and romantic ideals of youth, vigor, and primitivism, also endowed him with Christian idealism and a distinct correlation with St George (the dragon slayer). Such a romantic hero, according to Shelley, would “inculcate virtue” as readers would admire and emulate his virtues.  But Siegfried is also the least interesting character in the film.  His innocence is repeatedly portrayed as naiveté and his mortal weakness is prominently exposited early in the film.  If “poetry kindles the sympathetic imagination [and] allows us to find ourselves in another’s place,” then Lang appears not to have wanted his audience to identify too closely with this hero.

But framing him as a hero, and as the highest moral character in the film, creates a Romantic type of morality that is again reminiscent of Shelley.  “The great secret of morals is Love: going out of our own nature, identifying ourselves with the beautiful which exists in thought, action, or person not our own.”
Siegfried, caught up in feeling, threatens the primitive man describing Kriemhild, “Show me the way to Worms, or you will lose your life!”  Such a volatile, compulsive behavior can only be moral within the lens of Romanticism.  And Siegfried goes on to embody a Romantic ideal, beating foes by being impetuous and not particularly cunning.

Ultimately Siegfried’s exploits are the preliminary upswing of a melancholy plot arc.  From the moment Siegfried first arrives at Worms, the film firmly embraces an attraction to impossible situations.  This pattern of attraction functions to create the suggestive undercurrent that Poe requires of poetry in The Philosophy of Composition. This undercurrent of trouble looming is tremendous at creating the tension that rendered tragedy the zeitgeist of Romantic form.

It is worth noting that the audience that Lang had in mind for his film, was already loosely familiar with its source text.  They would have anticipated the death of Siegfried from the title sequence. Nibelungenlied was very much planted in the folk-culture of Germany.  However as a text the original epic poem began, ended, and centered around Kriemhild.  Lang’s decision to begin his text with Siegfried as the clear center shows a generosity toward the romantic idealism displayed in that character.  (Kriemhild doesn’t really pick up the pace as a central character until Siegfried’s death, which pace she pushes to a fever pitch in Kriemhild’s Revenge.)

Lang’s Niebelungen films are formatted much like an epic poem, broken into episodes, and Siegfried’s character is even initially introduced to Kriemheld through a ballad.  This parallel to poetic form shows Lang’s attentiveness to form, and the self-aware nature of the film itself, which picks up complexity as the moral order of the remaining characters hits the fan.

Lang plays out every scene with an unhurried intensity that allows for full exploration of characters’ actions and reactions. By investing in such detailed scenes Lang “makes the familiar unfamiliar.” Elaborating what could have been more concise scenes in order to dwell on experience and effect between characters creates an intensely poetic undercurrent to what might otherwise be an abyss of a plot. To again quote Shelley, this measured intentionality “strips the veil of familiarity from the world, and lays bare the naked and sleeping beauty which is the spirit of its forms.”

Given this level of intentional approach to the development of character and relationships, is seems Lang was not unaware that his more complicated characters were more interesting than the tragic hero.  The intended effect was perhaps similar to Shelley’s estimation of Milton – saying “his poetry was superior and authentic because there was no superiority of his god over his devil.” So by creating a simple tragic hero, Lang could achieve Shelley’s ideal of melancholy in his demise. “Even in the desire and regret [he leaves], there cannot be but pleasure.” 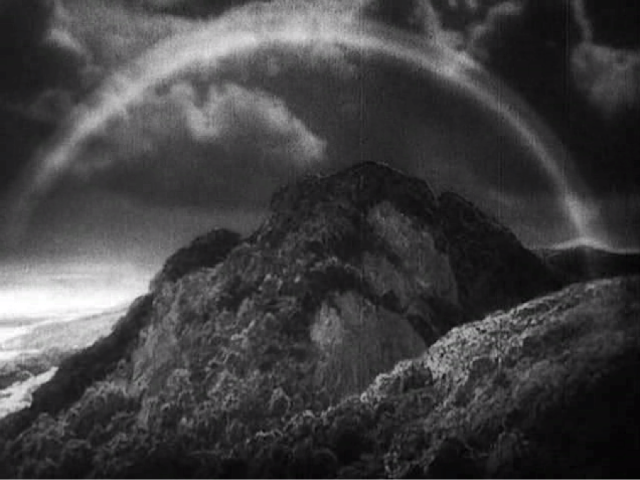 Lang’s artistic decisions in this film seem bent on dwelling on aesthetic detail, special effects, and elaborate sets.  That he managed to indulge in such aesthetics, at a time of such economic turmoil, is telling. The novelty of special effects in film fantasy opened up access to resources at an otherwise dire time.  That Lang managed to create an actual manmade rainbow to film, or to design and have built a 60 foot long wooden dragon-puppet, at a time when workers and extras had to literally be paid with wheelbarrows full of cash is remarkable.  It indicates that not only were these sensory details important to Lang, and important to the tone and form of the film, they were important to the contemporary audience as well. 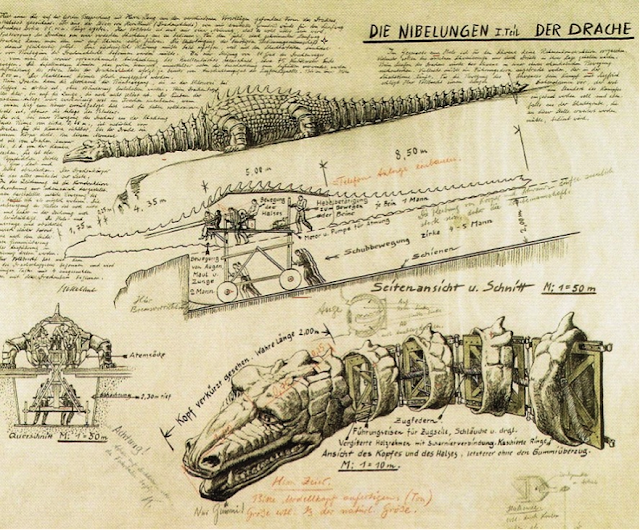 The impressive images of Worms, with its elevated battlements and atmosphere of power seems like a “bastion of all humans can achieve.”1 Such motifs not only look impressive, but also create tremendous meaning regarding the systems in which this narrative is progressing.  Systems of power, tradition, moral codes, and of the valuation of beauty. The deconstruction of this system and its moral code becomes a prominent theme in Kriemhild’s Revenge, but it is also present in Gunther’s perpetual state of dilemma.

To an extent, in this realm of melodramatic character development, beauty and virtue are synonymous.  Margarete Schön, as Kriemhild, is credited with having done “some of the most operatic eye-acting in the history of silent cinema.”1 The depiction of her character as beautiful seems to be largely based on qualities of peacefulness, deference, and ethereality.  All of which qualities she turns on their head by the bloody end of Die Nibelungen.  There is also a perverse delight in Brunhild’s dysfunctionality.  Her highly affected discontent is like a celebrity train wreck and we just can’t turn away.  She is so over the top that, to quote Poe again, we would “cover up our attraction to the image by seeming only to lament it.” 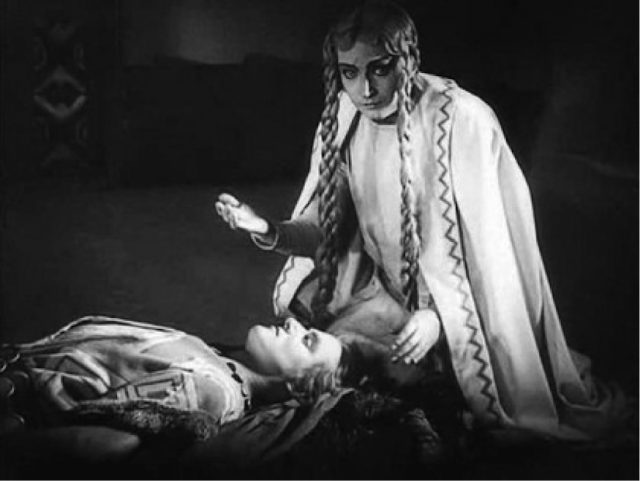 The loss of Siegfried acts as a cataclysmic loss of youth, beauty, and innocence.  The entire possibility of moral order disintegrates with his death.  At this point, the melancholy of the film quickly passes by the tragic ideal of Romanticism and takes on a much darker, more complex and calculated edge.  Rather than dwelling on the poetic image of Kriemhild mourning her lover, we quickly pass over into the realm of vengeance and loyalties.

Ultimately, Lang’s project carries far more semiotic weight than being an exploration of Romantic ideals.  But he used that exploration and those ideals to create a narrative that explores a number of the difficulties and nuances of moral and economic order that were terribly relevant to Lang and to “The People of Germany,” to whom he devoted the film.
_________________________
1. http://www.ferdyonfilms.com/tag/fritz-lang/
Posted by Em at 1:25 AM