“Like one, that on a lonesome roadDoth walk in fear and dread,And having once turned round walks on,And turns no more his head;Because he knows, a frightful fiendDoth close behind him tread.” ― Samuel Taylor Coleridge, The Rime of the Ancient Mariner 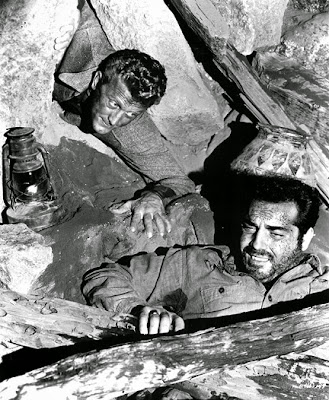 By definition, an “Ace in the Hole” is a hidden, or unfair advantage, kept back until the perfect opportunity presents itself (referring to a face-down Ace in stud poker).  In the 1951 Billy Wilder Film, loosely informed by the true story of Floyd Collins, Chuck Tatum (Kirk Douglas) is a thwarted, ambitious journalist who is unabashedly on the prowl for an opportunity to regain his big city career.  Before he even stumbles upon the story he is able to use toward that end, it has already become relatively evident how he is scheming for events to pan out.

While Chuck Tatum claims that he “doesn’t make things happen, [he] just writes about them,” the film makes it very clear that Tatum’s actions intentionally and unintentionally alter every conceivable course of events in the story of Leo Minosa.  Dewey claimed that “what actually happens (action) is dependent on the presence or absence of perception and communication.”  Tatum appears utterly anomic as his drive to craft a “perfect story” overpowers any morality, honesty, civility or integrity that his character may have had claim to.  He willfully crafts a distorted perception of reality, knowing full-well how it would affect public opinion, all while creating such a loathsome actual reality (at least as perceived by the apparent omniscience of the camera), that his “ace in the hole” devolves into an albatross around his neck.

As Dewey also purported that “the ultimate harm is that the understanding by man of his own affairs and his ability to direct them are sapped at their root when knowledge of nature is disconnected from its human function.”  Tatum grasps hold of and maximizes that disconnect toward what he believes is his own advantage.  He capitalizes on corrupt individuals, bargaining with them to keep Leo Minosa trapped in a cave longer, thus allowing him to craft a more elaborate, more profitable story.  When Leo ultimately dies of pneumonia, Tatum’s perfect story crumbles beneath him.  He must deal with having murdered a man he had exploited unconscionably, who had genuinely believed in his friendship.  This complicated grief, coupled with a probably punctured spleen, lead to his collapse at the end of the film, as he is finally, frantically, trying to “tell the truth.”

Describing the public’s habit of hero worship, Walter Lippmann pointed out that in times of security “symbols of public opinion are subject to check, comparison, argument…” and that a fluidity of inquiry helps to maintain a certain objectivity of truth.  But that in less certain times (emergencies, wars) there are a greater range of feelings aroused, and that men are more likely to respond emotionally than objectively.   Since, as Lippmann also maintained “men respond as powerfully to fictions as they do to realities,” and fictions are not necessarily equivalent to lies, but “rather a representation of the environment made by man himself.”  It is not surprising that the public and the press ate up Tatum’s constructed story just as he had hoped.  It was based enough in reality to be a fiction, and not a lie.  (As Tatum points out to the newspapermen, he did make sure there was a man trapped down there, even if everything else was altered or constructed).

Around the few concrete facts Tatum did use, he also constructed an elaborate, rather deceptive pseudo-environment.  He mediated for the public their relationship with the reality of Leo Minosa’s situation.  He lied abjectly about the nature of Leo’s relationship with his wife, but had no need to embellish the grief of Leo’s parents.  He artificially painted the sheriff and himself as protagonists, but Leo’s own background as a soldier was factual and easily used to increase “human interest.” The most devastating altering of reality, however, occurs in Tatum manipulating the rescue operation, encouraging blackmail of the contractors to make them choose a longer option for the rescue, in hopes of having time to build his story to a nationwide fever pitch.  Ultimately, is appears that Tatum’s interference altered everything about this “story.”  And as we watch Leo’s bereft father, facing the mountain that held his dead son, with acres of litter from “the public” before him, we are led to infer that everything could and should have transpired much differently without the interference of “journalism.”

Lippmann, admitting to flaws in journalism, listed factors that inhibit access to “facts.”  Several of these are painfully present in Tatum’s interference.  He constructs artificial censorships and limits social contact, primarily through his corrupt pact with the Sheriff and with Lorraine Minosa.  Nobody but Tatum is allowed to speak directly to Leo, and Lorraine is threatened when she speaks to other reporters.  Tatum also takes advantage of the distortion created “when events are compressed into short messages.”  His intense interest in the commercial success of his story not only destroys the integrity of his journalism, but is alters action, choices, and events with varying degrees of devastation for different people.

The treatment of “the public” or the masses in this piece is more in keeping with Lippman’s assertions than with Dewey’s, though the concerns of both writers about how the public deals with misinformation are realized.  The public, especially as embodied by “Mr. and Mrs. America,” the Federbers, are terribly gullible, and their interest and perceived investment in the story of Leo Minosa are easily crafted and led by Tatum.  Despite the artificial nature of their “relationship” with Leo, their grief at his passing is viable, even if it is neither immediate nor over a real relationship or even the "real" Leo.  It appears that this “public” is inevitably led by the crafting of public opinion, and so in keeping with Lippmann’s argument, what is needed is better, more inquisitive journalism by an elect breed of incorruptible journalists.  This type of integrity is represented in the film by Mr. Boot, the owner of the Albuquerque newspaper, with multiple needlepointed “Tell the Truth”s adorning his office. 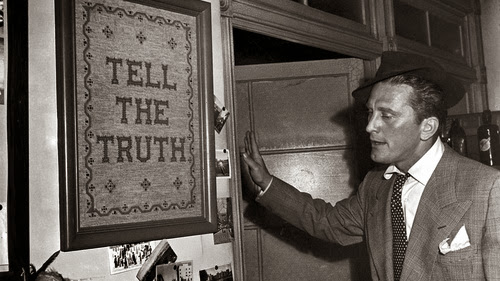 At some point between when Leo innocently asks Tatum, “You wouldn’t be lying to me now, would you Chuck?” and when Tatum disgustedly proclaims over the loudspeaker to the crowd, “The circus is over.” Tatum appears to have internalized the gravity of what he has done.  Before his character collapses, possibly dead, back in the Albuquerque newspaper office, he has a short-lived new directive of voicing the story of what actually happened, and how a crazed reporter could string so many people along to such a devastating end.  Whether the exposé of this corruption ever surfaced in the reality of the film is unresolved, but the film itself is the actual exposé, and invites viewers to examine the critical thinking that goes into their own news consumption, and to recognize that their relationship with reality is always mediated, and often mediated imperfectly.
Posted by Em at 1:41 PM