Generic Ambiguity – playing with audience expectations in The Maltese Falcon

The Maltese Falcon provides an interesting case study for genre analysis, as it is credited with a role in catalyzing the era of Film Noir and as the film itself uses, plays with, and resists genre-based audience expectations. 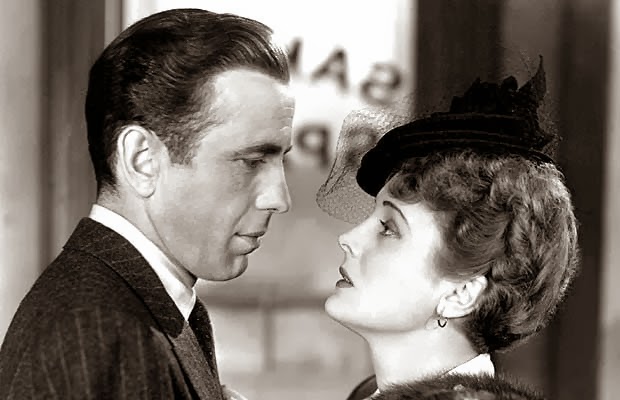 It is worth noting that this film was seminal in establishing both Bogart and Huston’s careers. Audiences were not familiar with either of them when this film was released in 1941, less than 2 months prior to the bombing of Pearl Harbor and engagement of the US in World War II.   A retrospective understanding of eminent historical events and of the legacy of Bogart’s career playing a litany of variations on Sam Spade affect a modern viewer’s engagement with this text in a way impossible for its contemporary audience to chew on. The film is now, in several ways representative of a style (and arguably a genre) that was not yet established upon its release.

The film opens under the pretext of a detective mystery, but following the generic shift of the novel on which it is based, the hero of this mystery is flawed and proletariat, speaking in jargon and functioning under a fallen pretense of the society in which he works.  Prior to this film, and even in previous film adaptations of the same novel, the hero and his worldview were significantly softened and romanticized.  Huston’s achievement here may have been in finding a way to cinematically express the pessimistic realism of hard-boiled writers while avoiding conflict with censors or the Hayes Code, and establishing a pattern for all of Film Noir to follow. In some ways he cinematically introduced, what Schrader termed the "narcissistic, defeatist code"[1] of protagonists created by Hard Boiled writers like Dashiell Hammett.

The ultimate nature of the film remains ambiguous throughout, as romantic elements struggle against gritty pessimism.  The ambiguity is ultimately tied up in the mystery of Brigid O’Shaughnessy’s compulsive lies and in uncertainty to how Sam Spade will ultimately respond to her.  In establishing the plot and mystery over the course of the film, several possible solutions are proposed, each of which, if “proven” would create parameters of a given moral code for the film, and thus define it’s genre quite differently.  Each proposition varies based on the level of romanticism versus realism in the characters of Sam and Brigid as well as in the amount of corruption revealed in each character.

If Brigid’s initial lie about her "sister" had been true, the film could have been a straightforward crime drama with a heavy dose of innocuous romantic involvement. "Good guys" and "Bad Guys" would have been easy to identify and categorize.  But each time Spade resists believing her façade and her character becomes increasingly morally dubious, the implications for the moral order of the entire film are that its reality becomes increasingly dark, dangerous, and pessimistic.  The introduction of the possibility that Sam will engage in behavior as corrupt and self-serving as that of Brigid or the more overt criminals Kasper, Joel, or Wilmer, creates a terrific range of possible moral orders for the film, within the film.

The film concluded in perhaps the perfect place to catalyze the Film Noir movement.  Brigid was revealed as an intractable black widow type femme fatale, but Sam’s actions cast him instead as quintessentially “hard-boiled.”   Ultimately he is a lone wolf – resistant to the allure of Brigid’s dangerous romanticism; a little bit lawless, but fundamentally incorruptible at some limit.

This moral order, where climactically the protagonist can be trusted to resist corruption, but every other character (and the world of the film at large) is suspect, seems like the perfect signature for nascent Film Noir.

The Maltese Falcon is absent many of the more visual, semantic elements usually attributed to Noir films.  Its lighting in particular is even and unexpressive, but in syntactic elements, many of the structures required for Noir to take off were strongly introduced here; particularly the tension between pessimistic realism and romanticism and the sympathetic portrayal of the protagonist’s narcissistic pessimism and acceptance of his flaws as benign in relation to those of others. (A palatable entry of the anti-hero?)

It seems that the moral order of the universe of the film is an additional syntactic element that may be used to identify genre, as it certainly relates to the audience’s expectations of any given text.  Altman said that “the audience for a genre film is sufficiently committed to generic values to tolerate and even enjoy in genre films capricious, violent, or licentious behavior which they might disapprove of in real life.” [2]  This would seem to be because the audience has an acceptance and expectation for a moral order in the universe of a given genre’s reality that they accept is different from that of their reality.  If, however, an audience came to a film text prepared to accept a given moral order and were then presented or affronted with a contrary one (as might have occurred in the Maltese Falcon had Sam ultimately proved corruptible), it would likely leave the audience considerably unsettled.

That potential for unease has certainly been exploited intentionally in more recent times, but in 1941 the gritty pessimism of Sam Spade may have been just enough Noir to be widely acclaimed and accepted and to jumpstart a decade of deep darkness and high style. The counter-cultural acceptance of this defeatist morality works, according to Altman, "When we are in the world, we follow its rule; when we enter into a genre film, all our decisions are self-consciously modified to support a different kind of satisfaction."  The Maltese Falcon appears to have introduced, in large measure, the "satisfaction" possible in Film Noir, and with it's unexpected commercial success, created a "world" and a moral order that audiences were willing to re-enter repeatedly, embracing its "overtly counter-cultural acts" in order to experience the kind of satisfaction that came from watching Sam Spade soundly reject romanticism, living by the moral order of a "narcissistic, defeatist code".