Star Wars Uncut and effects of Conversion on the Fan Film

Fans have been making their own video re-interpretations of the original Star Wars texts since their release. (An early example can be seen here). Ever since recording technology has been affordable enough to get into the hands of fans, this has been a type of media.

The appeal of re-enacting an existing media artifact seems to function as a fulfillment of the “ago-old desire to live out a fantasy aroused by a fictional world…intensified by a participatory, immersive medium that promises to satisfy it more completely than has ever before been possible.” (Murray[1])  Though it seems in many cases these fans are acting out the double fantasies of the fictional world portrayed in the original text and the additional fiction of participating in the creation of that original text.  In the case of Star Wars, fan remakes allow fans to enjoy both the fantasy of Long ago in a galaxy far, far away, AND the fantasy of George Lucas directing a cast of actors in the creation of an artifact that the fan is deeply invested in.

So long as the technology used to create these fan texts remained relatively cumbersome, most shared fan-made recreations of the text were straightforward and not intentionally self-reflexive. However, as technology has made the creation and distribution of these fan texts easier, and as an actual audience for fan art has formed online, the nature of fan-art “the thing itself” has matured to encompass a range of postmodern and poststructuralist possibilities.  Jenkins[2] might point out that video fan art as a medium has existed for almost 50 years, and that only technologies through which that medium is captured and distributed have changed.  It would be difficult, though, to argue against a very real evolution in what fan art is as it has changed from being something created for the “artists” own enjoyment to being something created for a broad and engaged audience.  The conversation has, in many cases become wittier and more intertextual, though as Jenkins points out, “When people take media into their own hands, the results can be wonderfully creative; they can also be bad news for all involved.”  The concept of an audience seems to bring out the best and the worst across a strata of creators. 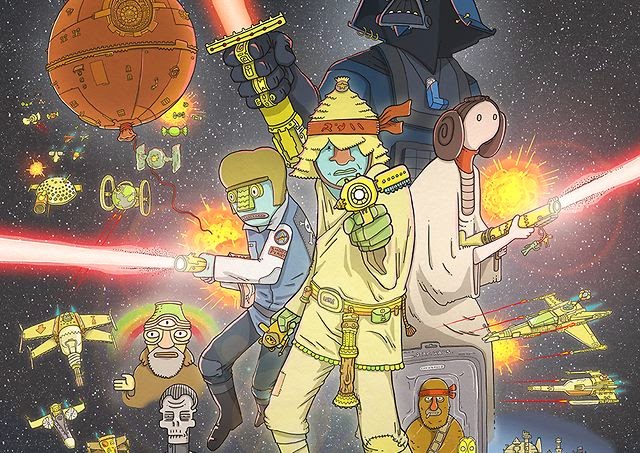 Star Wars Uncut comes along as an interesting vehicle for fan art, both because of it’s collaborative nature, and because of its ability to show a broad scope of the realm of fan-films in a relatively condensed way.

The idea of a feature-length collaborative creative endeavor organized entirely online through a fan forum is a strong illustration of Convergence as described by Jenkins.  “Convergence doesn’t just involve commercially produced materials and services traveling along well-regulated and predictable circuits.  It doesn’t just involve the mobile companies getting together with the film companies to decide when and where we watch a newly released film.  It also occurs when people take media in their own hands.  Entertainment content isn’t the only thing that flows across multiple media platforms.”

Star Wars Uncut seems to actually illustrate a spectrum of old-consumer relationships with the original text and new-consumer engagement with it.  Old-consumer style could refer to the “straight” segments, striving for maximum verisimilitude with the original text and it’s diegetic world.  A new-consumer end of the spectrum would be those segments that totally reinterpreted the text to create something new, either by reinterpreting the written dialogue (such as CP3O’s offer to assist Master Luke) or by reinterpreting the setting (usually involving heavy intertextuality, such as the Yellow Submarine sequence) , or by abandoning verisimilitude altogether to create something intensely self-reflexive.

Across the 500+ 15-second-segments that made up Star Wars Uncut’s version of Star Wars, A New Hope, there was illustrated a breadth of engagement with the original text that created an audio-visual aid illustrating the broad possibilities for a single viewer’s experience encountering the primary text.  This reinforces Radway’s[4] insistence that a critic’s singular view of a text’s meaning is problematic.  “The behavioral explanations and sociological theories [critics] advance to account for [a] genre’s popularity have been produced, then, by a process that is hermetically sealed off from the very people they aim to understand.”  Radway proceeded to engage with a group of consumers who engaged with their texts in manners very similar to one another, how much more true is her emphasis on the role of reader/viewers in creating meaning when considering a group with disparate ways of engaging with a text?

The appeal of the Star Wars Uncut project for its participants seems likely to have been diverse, however the appeal of such a participatory medium is well articulated by Murray in that “the enchantment of the computer (by which this film project was initiated, distributed, and in many instances produced) creates for us a public space that also feels very private and intimate. Computers are liminal objects, located on the threshold between external reality and our own minds.”  While not all participants interpreted participation in the same way, the 15 second limit functioned as a “mechanism of participation” that limited the ability of any particular clip to stray too far from the original text to render the narrative unfollowable.  This functioned in some ways like the “explicit mechanism of participation” (In LARP/Live Action Role Play) that serve to “sustain the illusion of a fictional world.”

The downside of this mechanism, is that 15 second intervals are painfully frequent for a viewer of the finished text.  The continual alienation of the audience, having to re-orient themselves within the frame of the narrative as settings, actors, costumes, styles and tones constantly change, makes me think that this is only a stop along the road of increased audience participation in media convergence.  I expect that platforms allowing audiences and fans to participate in the creation of more fluid and sophisticated fan fictions are in the near future.